How To Get On Spotify Editorial Playlists in 2021

New Music Friday is the trending Spotify playlist that all emerging artists want to be placed on. This hot list includes the best new music that’s being added to the screaming service that week – and the best part is, New Music Friday gets more than 60,000 streams each day, making it fantastic exposure for your tracks. Previously, only artists signed to major labels were able to get on Spotify editorial playlists. However, when you have enough quantity of streams and positive reactions to your songs, the Spotify algorithm may place your track on this coveted playlist. 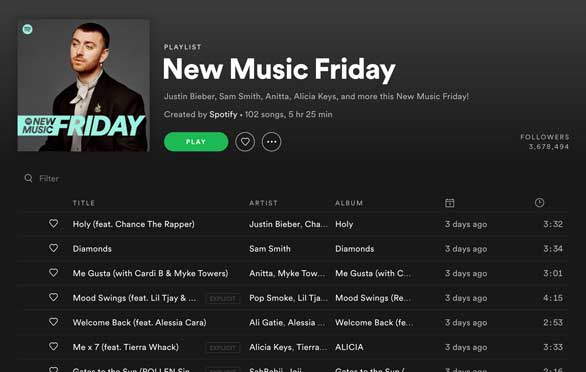 When your track is added to Spotify editorial playlists, you’ll enjoy a huge boost your career as an artist, with benefits like:

Some of our clients have enjoyed the distinction of being added to the best and most popular Spotify playlists, including New Music Friday, RapCaviar, Rock Anthems, New Pop Revolution, and many more.

It’s no secret that everyone yearns for a spot on editorial playlists with huge numbers of followers, and some of those playlists are curated and constantly refreshed with new songs. For example, New Music Friday is refreshed every week, so your song can only potentially appear on the list for the first week it’s added to Spotify. However, other editorial Spotify playlists, such as Dreamy Vibes, Soul Lounge, or RapCaviar, may continue to include your songs and give you massive exposure to subscribers for weeks, months, or even years.

We understand that success in the music business takes time, but don’t worry — we are here to guide you through the process and help you in every way possible, so that your career as an artist takes the best course to propel you to success.

How to Submit Your Music for Consideration on Spotify Editorial Playlists

The first step in submitting your music for a chance at getting on Spotify playlists is to verify your profile. This is necessary in order to send your tracks to the Spotify curators who decide what’s included on the playlists.

Head to the Spotify Artist page (http://artists.spotify.com), log in with your artist account, and fill out your profile information as completely as possible. 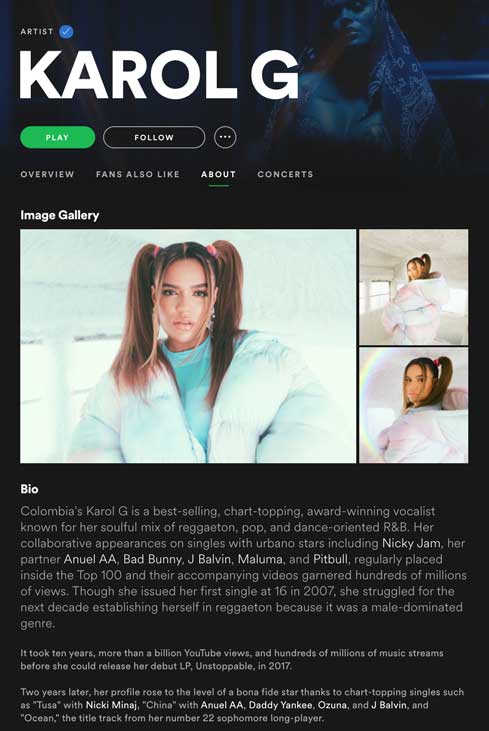 Tips for creating a great Spotify artist profile: Your profile is an important part of the decision-making process when it comes to inclusion on playlists. Spotify takes pride in their platform as the number one music streaming service, and their playlist curators give preference to artists who offer detailed profiles that include great photos and graphics. Don’t skimp on this area — take the time to write an appealing biography, and be sure to include plenty of photos, logos, and other artwork along with links to your website and social media accounts.

Although the Spotify audience may not visit artist profiles very often, the platform’s curators do. Keep in mind that you want to impress the curators, which in turn will lead to greater audience exposure through Spotify playlist placement.

Want more information on catching the attention of Spotify curators? Check out our other article on how to make a fantastic Spotify artist account:

Here are some key points to keep in mind before you send in your playlist submission:

How to Get On Spotify Editorial Playlists

Let’s get to the important part of this article: how to get on Spotify editorial playlists! First, head to the submission page of the Spotify Artists section.

Under the Upcoming tab, you’ll find a button called PITCH A SONG. This is what we’re here for. The button becomes available once your digital distributor has uploaded your track to Spotify — so you’ll need to get your distributor to upload your song at least four weeks before the release date in order to submit it. The PITCH A SONG button only appears prior to release, and will disappear once your song is live on Spotify.

Now that your song has been uploaded, it’s time to submit the correct track information to Spotify. When you click on the PITCH A SONG button, you’ll be brought to a page that will ask you general information about your track.

Select the Main Genre of your song first, and then choose your Subgenres — categories that are more specific to your music style. Your Subgenre selection is critical, because it’s easier to get on smaller Subgenre editorial playlists than the larger main categories. 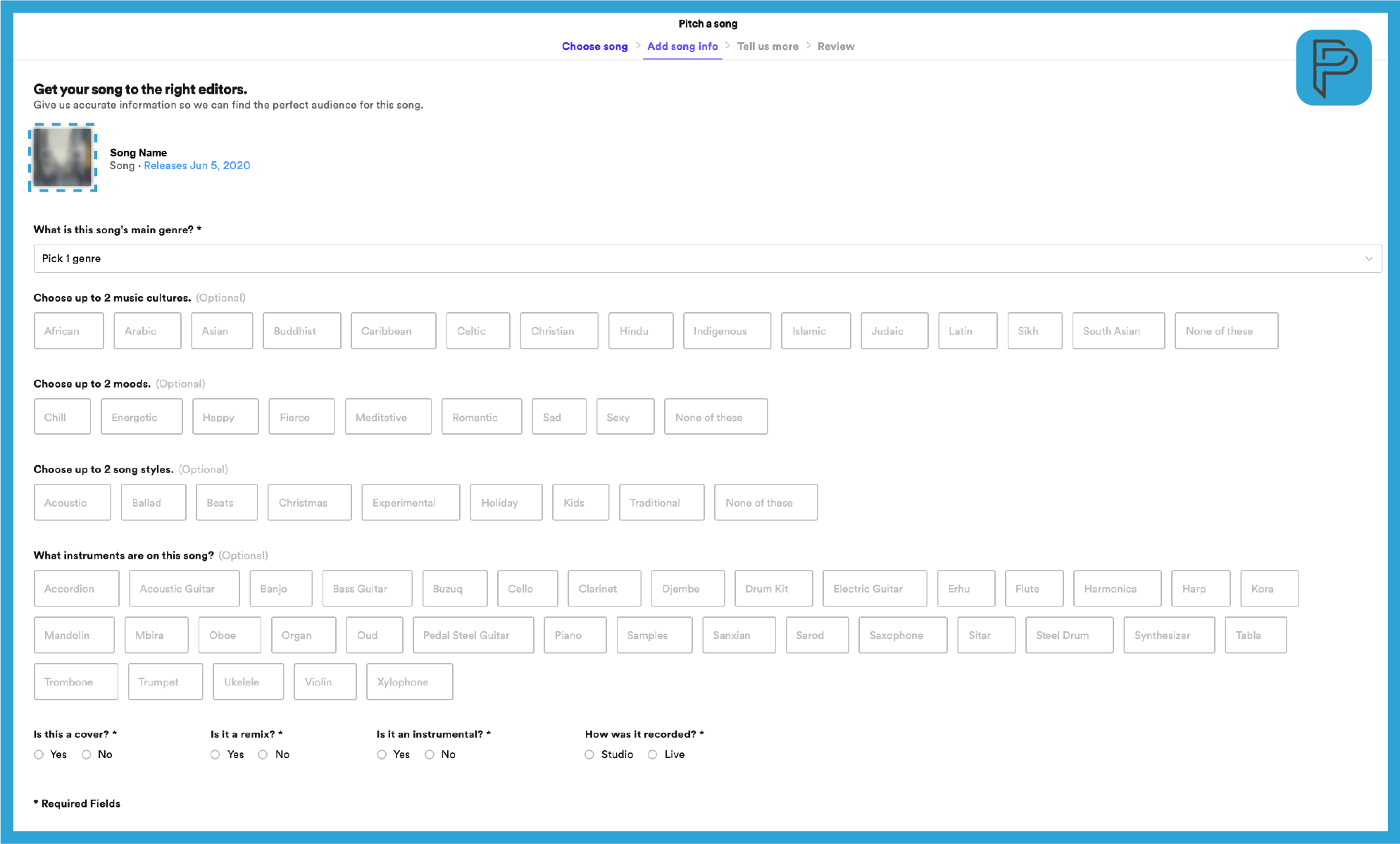 The next step in describing your song to Spotify is Music Culture, which relates to any religious or cultural influences on your music. For example, if your song contains Christian lyrics, it will have a higher chance to land on the Top Christian editorial playlist. If none of the culture options apply to your track, select the “None of these” option.

Moods, the next step in song description, lets you highlight the types of emotions you intend to convey with your track. After that is Song Styles, where you’ll indicate whether your track is a live production, an in-studio recording, an acoustic version, or something else. You’ll also choose the Language of your lyrics; whether the song is a cover, remix, or instrumental; and which instruments are featured in the track.

You can also specify your location during the submission process, in order to target local fans and playlists near you. For example, if you are from Ireland and your track is a folk song, you’ll have a good chance to get on editorial Spotify playlist Irish Folk – Ballads.

Finally, the Tell Us More section is where you’ll actually describe your song in order to pitch the track to Spotify’s curators. This section is crucial to demonstrate the quality and care that you placed into creating and recording the song, and will provide the curators with a sense of authenticity and priority during the selection process.

Now, it’s time for the real pitch. You must take care with the way you sell your music, or yourself as an artist, on Spotify. The curators are interested in how the submitted songs will impact themselves, their audience, and Spotify’s overall audience development. Be sure to include impactful details, if you have them, such as if you’ve worked with a well-known producer, collaborated with a recognized artist, or been featured on a popular show (e.g. podcast, YouTube channel, radio, or television). You should also add some keywords that describe which communities you want to influence and help narrow down your genre or style.

Here is an example of a successful Tell Us More section:

American Indie rockers Band Name return with Song Name after receiving support from the likes of WNYC Radio, Rolling Stone Magazine, and Red Bull. Their previous single was produced by Grammy-nominated Alan Parsons and received over 1 million views on YouTube. Now, Song Name shows them coming back bigger and better than ever, bringing their driving guitars, soaring melodies, and raw yet emotive vocals.

You could also include information about your marketing plans, such as:

Band Name plans an extensive advertising campaign on Instagram and TikTok to promote their new single on Spotify.

Demonstrating your willingness to market your Spotify music submissions yourself helps to show your commitment to promoting both yourself and the Spotify platform.

Example 2 of a successful Tell Us More section:

Recognized by the unique sounds of the synthetic keyboards she uses on each of her tracks, XMPL has made the Top 20 on the ElectroHits charts with two of her singles: “Test no.1” and “Beat 2 Beat”. Her SoundCloud profile has been firmly on the radar, gaining thousands of followers every month. XMPL’s creative mixing style has been compared to Stephan Bodzin and Boris Brejcha.

Be sure you review your submission carefully before hitting the submit button, to be sure that the information you’ve provided will indicate the most suitable playlists for your song. We also recommend researching the artists or bands you are influenced by, and seeing which Spotify editorial playlists they have been featured on — whether they appear on major playlists or niche subgenres with few followers. Never judge a playlist by the numbers!

These days, rising artists have a great opportunity to gain placement on the biggest Spotify playlists through the submission feature. Although your account will not show whether you track is being evaluated for inclusion, you can keep an eye on the new playlists added to your dashboard in your artist account to watch for your song.

More than 75,000 artists are constantly featured on Spotify’s playlists, and not everyone makes it to those lists. Here at Playlist-Promotion.com, we help you promote your music the right way. Our team of specialists listens carefully to all the tracks that we receive every day for promotion, and are constantly pitching those submitted tracks to hundreds of independent playlist curators.

If you need more help submitting your music to Spotify, or if you would like to know more about our services, please feel free to leave a comment in the box below or contact us anytime. It will be our pleasure to help you gain a wider audience for your music.

Good luck with your submissions!