|In Music Promotion
|By Playlist Promotion

We have an excellent way of promoting your songs on independent playlists on Spotify. You know already that you can gain a huge following of people who listen to your song when it is in a couple of playlists. However, you can increase those plays by generate something bigger, your placements on Spotify Discover Weekly, Spotify’s Radio (which are recommended songs) or Release Radar. You likely already know it from using Spotify yourself. These are official lists that are created using a Spotify Discover Weekly algorithm for each Spotify user. As your music becomes more well known on the smaller lists you will be automatically added to customized lists of many Spotify users.

Newly released songs are featured on our Spotify Release Radar. The list includes artists that a listener currently follows the account of. You want more listeners, encourage fans to connect via your artist account on Spotify. Having your music on Release Radar on Spotify is a great way to let others hear it. Release Radar Spotify playlist will appear for each user.

This is not an actual radio station. This is Spotify Radio. When a user’s list is done playing or there is nothing left in their query list, Spotify Radio will begin playing. Just like the Discover Weekly lists, Spotify uses the algorithm to choose songs based on the listener’s previous choices. The Spotify algorithm chooses songs for play on the Music Release Radar for listeners to decide on. 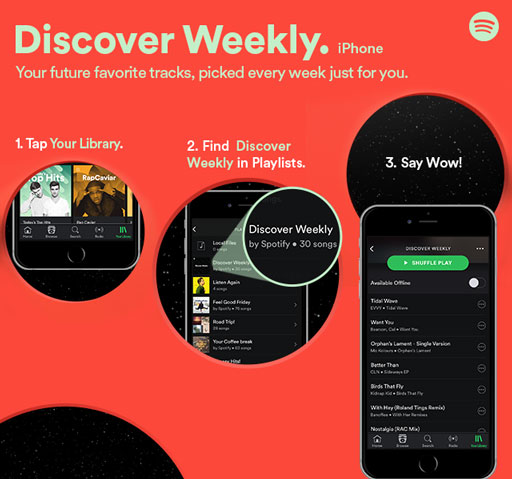 How Does Spotify Discover Weekly Work:

How to get on Discover Weekly:

To get on Discover Weekly your song needs a great performance, playlists placements, organic streams and saves. And here is where we can help you to get there! We will submit your music to many popular playlists which will help you boost your song to get on Discover Weekly. And the more streams you get through Discover weekly, the bigger is the chance to get a placement on a official Spotify playlist.